During the upcoming trading week interest rate decisions from the Reserve Bank of Australia and the Bank of England headline the economic calendar. Both central banks are expected to keep interest rates on hold, although the RBA may signal a December rate cut after recent disappointing inflation numbers. The Bank of England will also be discussing the UK economy for the first time since Brexit was delayed until January 31st next year.

European Prime Ministers and Presidents meet for a key EU Summit later this week to discuss ways to solve the ongoing problems in the eurozone. The European economy also releases a raft of important economic data this week including Unemployment, Inflation, Retail Sales and Manufacturing data. The Canadian and New Zealand economies will also release important monthly jobs figures. 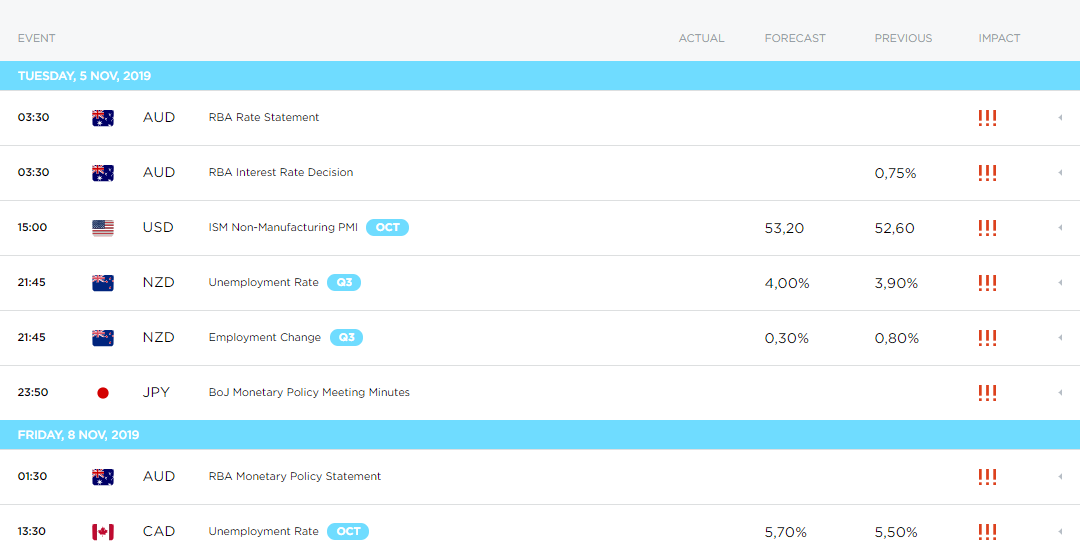 EU Retail Sales measures the sum of goods and services sold monthly at eurozone retail outlets. The report is also considered a measurement of consumption and consumer confidence. Consumer confidence and economic growth signal an increasing number of sales which would fuel the eurozone economy. The changes are widely followed as an indicator of consumer spending and the leading indicator of the health of the EU economy.

The monthly Canadian Employment Change is released by Statistics Canada and measures the change in the number of people employed inside the Canadian economy. The indicator is closely followed by the Bank of Canada and market participants. A rise in employment, consumption, and expenditures may lead to increased inflationary pressures that encourage central banks to tighten monetary policy.