During the upcoming trading week market participants look to the monthly jobs report from the US economy and a key interest rate decision from the European Central Bank. The Nonfarm payrolls job report headlines the economic docket this week, with most economists expecting another heavily negative monthly US jobs figure. Traders and investors also look to interest rate decisions from the European Central Bank, Bank of Canada, and Reserve Bank of Australia.

Manufacturing data is also on traders radar this week, with China, United Kingdom, EU, and United States PMI numbers all in focus. Gross Domestic Product data from the Australia economy and monthly jobs figures from the Canadian economy will also be closely watched.

The ADP Private Sector employment change jobs report is released by the US Automatic Data Processing Inc and measures the change in the number of people employed inside the American private sector. A rise of this figure is seen as positive and good for stimulating US economic growth, while a weaker-than-expected number is seen as bearish and a possible indicator for future economic weakness. 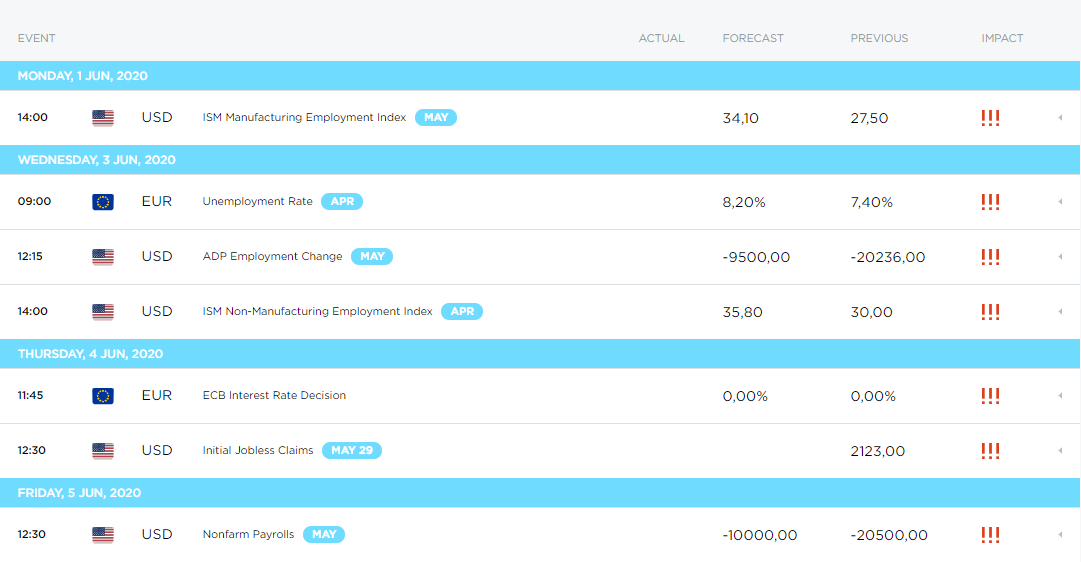 The European Central Bank’s interest rate decision is made by the ECB Governing Council on whether to either increase, decrease, or maintain interest rates. The key mechanism behind the monetary policy is the control of interest rates.

The NFP job report shows the monthly change in employment in the American economy, excluding the farming sector. The Non-farm payroll job report is the most carefully observed indicator in the employment situation inside the United States. It is considered the most inclusive calculation of job creation, which causes the Nonfarm Payrolls Job report to become highly significant to market participants, due to the great importance of labour in the United States economy.