Traders look to key US and EU macroeconomic data points

During the upcoming trading week market participants look to a host of important economic data releases from the US and eurozone economies. The Nonfarm payroll job report headlines the economic docket, with most economists expecting that the United States economy created just under 90,000 new jobs during the month of November. The eurozone economy is also in focus, with the release of EU and German PMI data and the official EU monthly Unemployment Rate and Retail Sales figures.

Other highlights on the economic calendar this week include the Reserve Bank of Australia and Bank of Canada interest rate decisions, with both the RBA and BOC widely, tipped to keep rates on-hold. 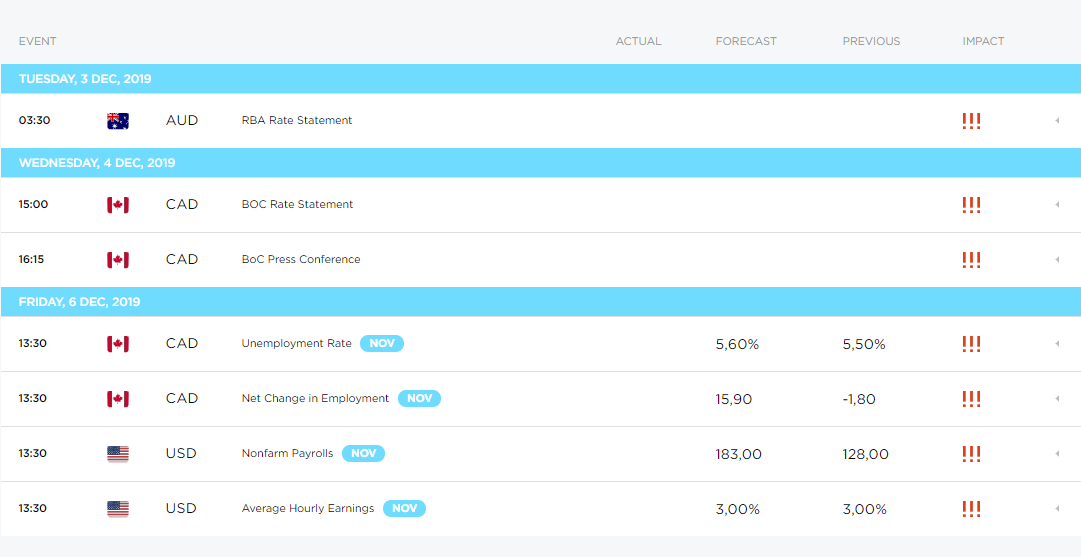 The ADP Private Sector employment change jobs report is released by the US Automatic Data Processing Inc and measures the change in the number of people employed inside the American private sector. A rise of this figure is seen as positive and good for stimulating US economic growth, while a weaker-than-expected number is seen as bearish and a possible indicator for future economic weakness.

EU Retail Sales measures the sum of goods and services sold monthly at eurozone retail outlets. The report is also considered a measurement of consumption and consumer confidence. Consumer confidence and economic growth signal an increasing number of sales which would fuel the eurozone economy. The changes are widely followed as an indicator of consumer spending and the leading indicator of the health of the EU economy.

The NFP job report shows the monthly change in employment in the American economy, excluding the farming sector. The Non-farm payroll job report is the most carefully observed indicator in the employment situation inside the United States. It is considered the most inclusive calculation of job creation, which causes the Nonfarm Payrolls Job report to become highly significant to market participants, due to the great importance of labour in the United States economy.