The EUR/GBP cross traded with a mild positive bias through the early European session, albeit lacked any strong follow-through buying. The upside remained capped near mid-0.9000s – an important confluence support breakpoint.

The mentioned region comprised of over three-week-old ascending trend-line and the 50% Fibonacci level of the 0.8867-0.9230 recent strong positive move. This, in turn, should now act as a key pivotal point for intraday traders.

Renewed optimism that the UK is heading towards a Brexit deal continued underpinning the British pound and kept a lid on the attempted recovery. That said, some follow-through buying beyond mid-0.9000s might prompt a short-covering bounce.

The EUR/GBP cross might then climb back towards the 38.2% Fibo. level and aim to reclaim the 0.9100 round-figure mark. Any subsequent strength might still be seen as a selling opportunity and fizzle out near the 0.9115-20 horizontal zone.

Meanwhile, technical indicators on the daily charts have been losing positive momentum and gaining bearish traction on hourly charts. The set-up supports prospects for an extension of the corrective slide from near two-month tops set last Friday.

The EUR/GBP cross seems vulnerable to challenge the key 0.9000 psychological mark, which coincides with the 61.8% Fibo. level. This is closely followed by the very important 200-day SMA support near the 0.8985 region.

A sustained break below should pave the way for a further near-term depreciating move back towards the 0.8900 round-figure mark. The downward trajectory could further get extended towards the 0.8865-60 strong horizontal support. 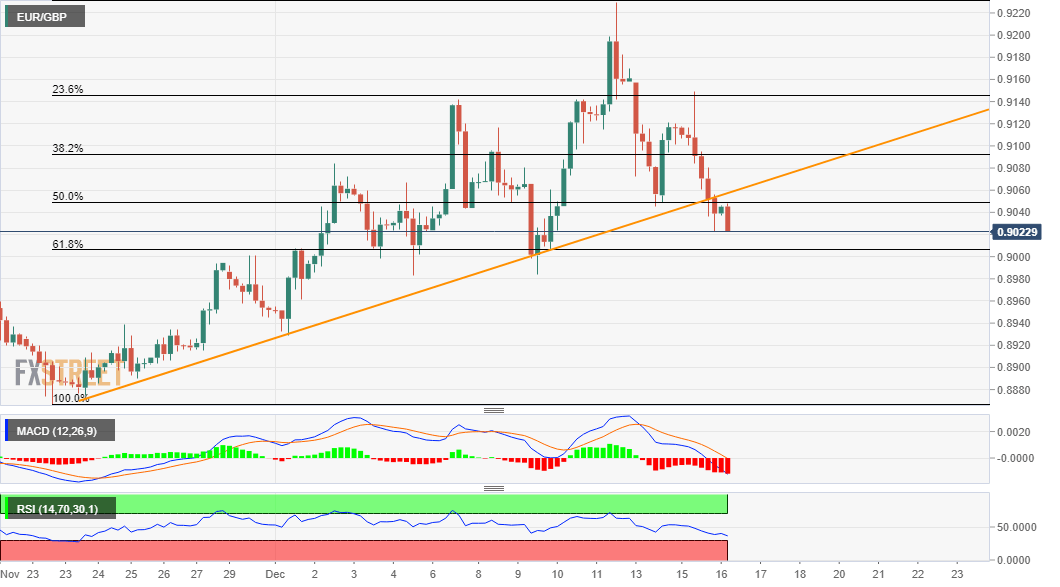