The Australian dollar declined slightly after the latest GDP data from China. The numbers revealed that the country’s economy rose by 0.6% in the first quarter after the Q4’s increase of 2.6%. This growth led to an annualised growth of 18.3%, slightly below the expected 19.0%. The country attributed the growth to large external demand and a 24.6% increase in fixed asset investments. Meanwhile, retail sales jumped by 34.2% in March while the unemployment rate fell from 5.5% to 5.3%. These numbers show that the country’s economy is leading the global economy.

US equities closed at record highs after the strong quarterly earnings. The Dow Jones closed above $34,000 for the first time on record while the S&P 500 notched its 22nd record close of the year. It has already jumped by 11% this year. Yesterday, companies like Blackrock, UnitedHealth, and Citi reported strong results. Most notably, Blackrock’s assets under management surged to more than $9 trillion for the first time on record. The shares also jumped after the strong US retail sales numbers and the fall of initial jobless claims.

The economic calendar will have some key events today. In Switzerland, the statistics agency will publish the latest producer price index (PPI) data. These numbers are important indicators of inflation. In the Eurozone, Eurostat will publish the latest consumer price index (CPI) data. Based on the previous estimates, analysts expect these numbers to show that the headline CPI increased from 0.9% in February to 1.3% in March. In the United States, the market will receive the latest building permits and housing starts numbers.

The AUD/USD pair declined from an intraday high of 0.7760 to the current 0.7730. On the four-hour chart, the pair has moved below the 50% Fibonacci retracement to the current 61.8% retracement level. The Relative Strength Index (RSI) has also moved from the overbought level to the current 60. It is also slightly above the 25-day moving average. Therefore, the pair may keep falling and then rebound to the 38.2% retracement at 0.7825. 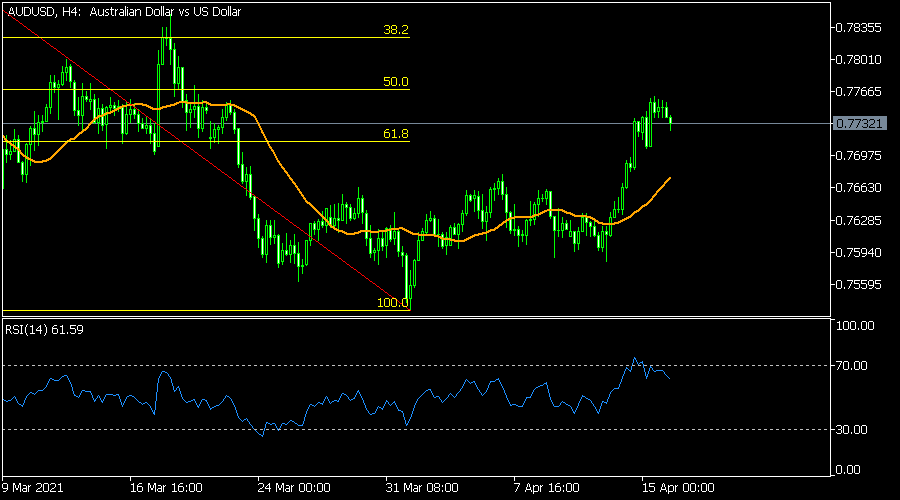 The EUR/USD pair rose to a high of 1.1990 during the American session. This was an important resistance level as shown in the four-hour chart below. It declined slightly as it forms the handle part of the cup and handle pattern. Similarly, the Relative Strength Index (RSI) and MACD have started to decline. Therefore, the pair may decline a bit and then resume the upward trend. The strong NZD/USD rally hit a major resistance at 0.7181. On the four-hour chart, the price is slightly above the 61.8% Fibonacci retracement level. It also moved above the ascending triangle pattern shown in yellow. The pair is also above the 25-day moving average while the RSI has started to form a bearish divergence. Therefore, it might resume the upward trend as bulls target the 50% Fibonacci retracement at 0.7200. 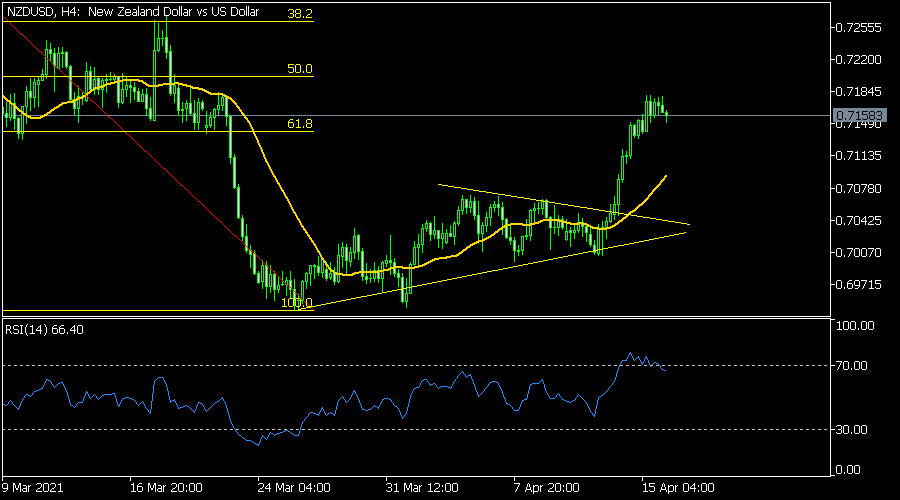